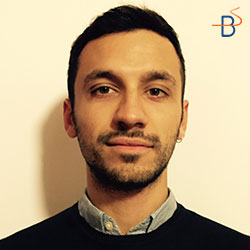 In 2013 Antonello Di Floriostarted working as R&D engineer in the NeiLab (Neuro Electrical Imaging and Brain Computer interface Laboratory) of the Fondazione Santa Lucia, in the same lab where he conducted his thesis project.

During his stay at Fondazione Santa Lucia, he was involved in several projects as HW and SW developer, acquiring a strong background in the field of bio-signals acquisition and processing and biomedical devices design, realization and clinical validation.

Being part of a cross-functional multidisciplinary team has improved his communication skills and his understanding of different approaches and needs, mediating between clinicians and equipment.

From June 2017, as Brainsigns developer, he coordinates the European Project SIMUSAFE and is responsible for the development of a device that can compute mental state indexes from bio-signals.